Later and in not as many words due to the unrepeatability of the language used “YOU DO NOT NEED A NEW SET OF WHEELS”. She was right I didn’t and in that moment of abrupt bubble popping I was gently brought back down to earth, back to reality. I didn’t need a new set of wheels for racing, but I so wanted them. I still wanted them. And why?

Did I really believe they will make such a huge difference to my performance on the weekend in the dizzy heights of A4? I’ll admit I’ve been sucked in. Sucked in by the incessant reminder that “aero” is better (42 seconds over a 40km Time Trial). I don’t do Time Trials and it’s highly unlikely I am ever going to win a race by a huge individual TT effort any time soon but the opportunity could arise someday and I’d hate to be left wanting.

Let’s face it, Aero looks better. Slick black carbon perfectly framing the wheel. It just looks faster, it looks right. They even sound faster, if that’s possible, the deeper the profile the more whoosh! Who doesn’t want to look faster and whoosh more?

Most importantly and probably the most convincing argument of all in this dilemma is purely “Everyone else has them”. I now find myself in another competition I didn’t sign up for the “Amateur Cyclist Arms Race”. Out on the road every passing cyclist is given the full once over. What bike are they riding? Is it better than mine? Do they have fancy carbon wheels? Just turning up at a race is like going to the gun-show every week, watching the A1 big shots prepare their weapons for battle. If I had better wheels maybe I’d be A1 too. Is that what’s holding me back?? 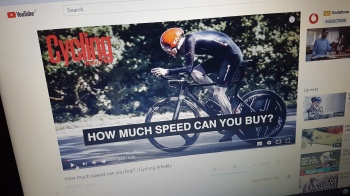 Of course, you don’t necessarily need this gear but on vulnerable occasions, maybe a couple of hours after a weekly kicking in a league race, you click on “checkout” in Wiggle and the deed is done. All the crucial details are saved there from the last time you crumbled to temptation. They’re ready and waiting for that perfect moment when you crumble again. With that one quick click, in your mind you’re already faster, already looking slicker, already whooshier.

All that was last year, and a year is a long time to keep these constant reminders at bay. A lot of things can change in a year but my desire for new wheels never left me. I did train hard, I kept that side of the bargain. Would it be so wrong to reward all that hard effort? It was an itch that needed scratching and in a moment of weakness or clarity depending on your perspective a nice new set of Zipp Carbon Wheels made their way onto my bike. I bought my ticket to the gun show, I just hope I’ve got the ammo now to back it up.

An amateur cyclist racing in Ireland looking to deliver a real experience of real sports people balancing life with attempts to remain competitive. View all posts by Darren Kelly-McCann

4 thoughts on “The Arms Race”