I spent my Saturday cosied up by the fire with one eye on the closing stages of Milan San-Remo and the other winking out the window at the clouds. Yeah, it was absolutely freezing but there was still no sign of this “Orange” snow forecast. Sunday’s race was sure to be on.

Ding! A Facebook notice appears on my phone. From Skane Wheelers: “There will be a course inspection early Sunday morning” Essentially what they were saying was the race was still on.
Shortly after the sun went down I took another quick look out the window. The drive-way was covered in snow. Ah sure Kilmessan is miles away. It’s probably just snowing here.
Ding! A text this time on the phone. From a source living close to the race: “Kilmessan is under a blanket of white snow”. Unofficially, the race was off. Officially, the race was still on. I better start pinning on my numbers.

Sunday morning I leapt out of bed and ran to the window…Hoping…Praying…Wishing the previous nights dusting would be gone but as soon as I pulled the curtains I could see the white glare behind the blinds. Heart-broken I slumped back into bed and checked my phone. No word from Kilmessan…..the race must be still on???….A grumble came from the other pillow “come on now, who are ye kidding”.

The Beast from the East had white-washed yet another race from the calendar. Fortunately the beast’s first victim of the year the Annaclone GP was rescheduled for Monday so there was still hope for some racing over the bank holiday weekend. On Sunday afternoon Banbridge CC confidently reassured us of a glaring sunshine forecast for the day. This race was definitely on! 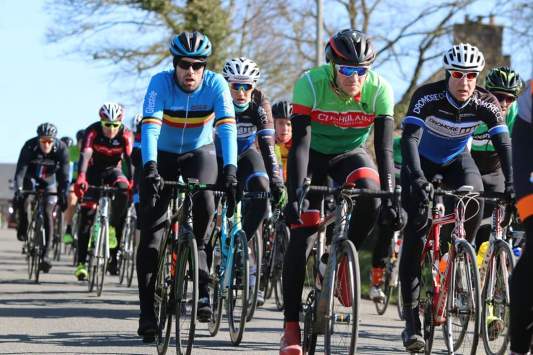 Annaclone was originally to be my first race of the season, a real test of my progress from this time last year. This was the place where my 2017 got off to a fairly lame start. The course is 5 laps of a lumpy circuit with some quick drops and a tough draggy climb smack bang in the middle. Last year this climb got the better of me after 4 laps. I blew up and was spat out the back of the bunch barely halfway up. The day ended with me peeling off the road to allow the A1/A2 lads pass by. I imagined each one of them judging me as they flew past. Another pathetic A4! This year I was determined not to let that happen again. This was my Beast and I had to get the better of it.

This year the plan was simple. Get up front before the climb started and give myself some space to drop back if needed. Find a strong looking rider and tag them the whole way up as if joined at the hip. If they moved on I moved on. If they dropped back, move on to the next guy. Every lap I approached the climb the same way and each ascent turned itself into a two-minute pep talk. “You got this”, “Don’t Panic”, “Just grind it out”, “Stick with them”, “Another 20 seconds”, “Breathe”.

On the third lap a group at the front hit the hill in full-on sprint and the hurt started straight away. There was a small split and lads desperately swung their elbows and arses mustering all their strength to keep in touch. 20 seconds from the top that familiar burning feeling from last year was beginning to creep into my legs. Don’t blow up. I dug in. “You got this”, “Don’t Panic” and crested the climb. I’ve never been more grateful to see a descent and a break from the pain. “Breathe”

The fourth time up the hill everybody seemed to be watching each other to see if the pace would take off again. The previous offenders spared us and the pace slowed enough to ease the pain slightly. On the fifth and final climb it became obvious I wasn’t the only rider with a fear of blowing up half a lap from the finish. This thought seemed to put manners on the bunch as it was the slowest of the day. I didn’t care though I had made it.
The hard part was over and I was still in the main bunch. I stuck myself close to the front expecting a quick tailwind finish. The pace picked up as expected but the desire to push myself was no longer there. I was satisfied with my days’ work on the hill and happily rolled in between 15th and 20th. Job done. I had slayed my own Beast!

An amateur cyclist racing in Ireland looking to deliver a real experience of real sports people balancing life with attempts to remain competitive. View all posts by Darren Kelly-McCann